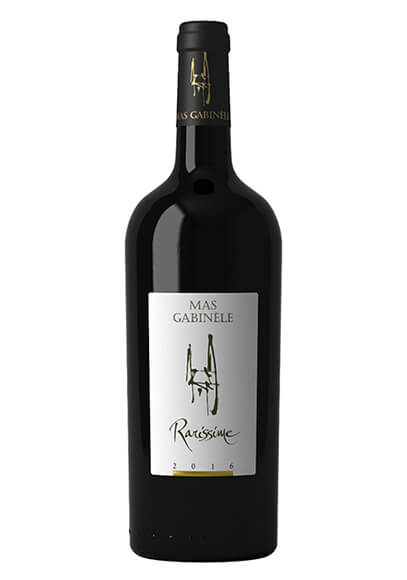 a terroir of blue and ochre schist

matured for 16 months in new casks

Found right in the middle of the Faugères appellation, our vineyards cover just over 18 hectares on the foothills of the Cévennes looking down on the village of Laurens. The vines, lying in an ideal spot at an altitude of 180 metres, are between 30 and 60 years old and naturally produce low yields.

The soil is predominantly Laurens-Cabrières sandstone schist, a neighbouring type to the Faugères hills soils. This soil type is of fragile structure, slightly acidic and can be difficult for the vines and which, when associated to adapted cultivation methods provides excellent balance for the vines.

The weather conditions were exceptional: record quantities of rain in March, exceptionally cool temperatures for May and June and a return of the rain in June and July.

This capricious weather system was not without impact on the vines, notably coulure on the Grenache, a significant phenological delay and strong pressure on plant health. Fortunately, the weather conditions became much more favourable for the harvest period, enabling us to achieve optimal maturity thanks to the patience and careful surveillance which characterises Mas Gabinèle.

Double Cordon de Royat trellising for Syrah and Mourvèdre, traditional goblet pruning for the Grenache. Yield was from 25 to 30 hl/ha depending on the parcel.

Hand harvesting with sorting of the ripest grapes in the vineyard (21st September to 10th October).

Long maceration periods at high temperature (25 to 30° C) even, and above all, after completion of the sugar cycle. Extraction by repeated and alternating classic techniques: pumping over, drawing off, cap punching. Early introduction into new casks. Matured for 16 months.

We have produced 13,000 bottles of this exceptional vintage.

Black is black, but there's still hope! Of discovering an outstanding concentrated and elegant wine. You can see how concentrated it is from its dense colour, powerful lingering aromas and lush mouth-feel.

The initially restrained aromas call for it to be decanted to reveal sweet liquorice, blackberry and blackcurrant jam, spicy pepper, mocha, pencil lead and cinnamon notes.

The big tannins are very dense yet fine-grained, lending incredible balance with a decent alcohol level and pleasantly surprising freshness too.

Obviously tasting a wine like this should be shared (Brassens would say no more than four though as, any more and you're a bunch of idiots). Sharing can be done with a slice of buttered bread to set your palate up then a Bresse spring chicken with truffles or a mature Salers cheese.